UK based organisation Hundred Heroines has nominated Gisele Wulfsohn heroine of the week:

The 13th International AIDS conference. Delegates and protesters on a ‘Global march for access to HIV/AIDS treatment’ from City Hall to Kingsmead stadium by Gisele Wulfsohn © Gisele Wulfsohn/Panos Pictures

Gisele Wulfsohn was born in Rustenburg, South Africa and died in Johannesburg. Her determination and spirit shone through from the start of her career. She rose from darkroom assistant with The Star in 1979 to chief photographer in 1986 for Leadership Magazine. Her next step took her where she was able to touch lives with her unforgettable sincerity. She freelanced for AFRAPIX, a photographic collective involved in documenting and exposing the anti-apartheid struggle along with social issues such as poverty and homelessness, in 1987. Her relentless tongue-in-cheek, almost ironic sense of humour was always present.

Her specialisms were in her extraordinarily sensitive portraiture, and work documenting education, health and gender issues.  Between 1987 to 1990, she photographed various HIV/Aids awareness initiatives producing ground-breaking work to reduce the stigma of Aids. In l999/2000, while working for the Department of Health’s Beyond Awareness Campaign, she compiled a series of portraits of 31 South Africans who had publicly disclosed their HIV status. Her ‘Living Openly’ photographs were published extensively in newspapers and magazines around South Africa, and were exhibited at the Durban International Aids Conference (July 2000). They also showed in a TV documentary which was broadcast four times in August 2000 and at numerous centres and conferences, such as the Aids in Context Conference at University of the Witwatersrand in April 2001 and the Healing Through Creative Arts Conference at Museum Africa, in Johannesburg in November and December 2001.

Gisele documented the actors of the City Health Acting Troupe (CHAT) performing an HIV education play in clinics to increase condom use, established by the Johannesburg Health Department. The plays were usually performed at waiting rooms and other public spaces such as Joubert Park Clinic. She also worked with Gary Friedman in the ‘Puppets against Aids’ project in Diepkloof Prison in 1996 documenting the men incarcerated. The prisoners loved her so much that they wrote a song, ‘Gisele, My Darling’, the lyrics describing how much she meant to them. 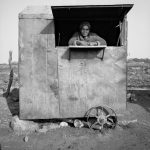 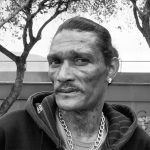