Photographer and filmmaker, Henion Han chronicled his family, the Chinese community in Johannesburg, as well as his travels from the late 1970s to the early 2000s.

Show Info about this photographer
Photographer Kuing-Yuan ‘Henion’ Han (1952-2018), chronicled his family, the Chinese community in Johannesburg, as well as his travels, from the late 1970s to the early 2000s.

Henion was born in Johannesburg to Chinese immigrant parents, and was a teenager when the family relocated to Taiwan for a few years in the later 1960s. Henion acquired his first stills camera when he returned to South Africa in 1970, after matriculating and while completing a Bachelor of Arts Degree via correspondence. He joined the Market Photo Workshop and met master photographer David Goldblatt who had a profound influence on his development as an artist. Henion worked as a printer of black and white photographs at Procolor in the early 1980s, where he hand-printed David Goldblatt’s images that are now regarded as some of Goldblatt’s finest prints.

Henion held two solo exhibitions, both at the Market Theatre Gallery, “Social Landscapes” in 1979, and his follow up exhibition in 1981, about his mother, titled “Black and White Days”. He also showed his work at the National Gallery of South Africa, the Johannesburg Art Gallery, and the Pentax Gallery.

In 1984 after teaching film at the University of Witwatersrand for three years, he completed his Honours in Film, and was awarded a Fulbright Scholarship to pursue a Master of Fine Arts     degree at the Art Institute of Chicago. His thesis film, “Utter” was awarded the prestigious Raymond Nelson Fellowship and showed at film festivals.

At the beginning of 1988, Henion returned to South Africa and began working in the film Industry, as an editor and director. He and his wife Lee had two children, and lived in Johannesburg. He directed the highly acclaimed documentary “Passages” about the writer JM Coetzee. In 1998 Henion was awarded a grant by the Department of Arts and Culture which allowed him to complete his documentary “Letter to my Cousin in China”, exploring his family’s diaspora experience. This ephemeral poem of loss and belonging was recognized for its unique voice and sensibility and was awarded best Documentary in 1999 by the South African Guild of Editors.

In 2000 Henion relocated with his family, from South Africa to Australia, where he worked as an editor for 12 years. During that period, he did not pursue photography, however for his 60th birthday he bought a digital stills camera, and traveled to India where he chronicled his journey.

In 2013 he returned to South Africa to edit the documentary “Mandela’s Gun”, which was completed in 2017. He continued to edit feature documentaries. He shared a South African Film and Television Award (Safta) in 2018 as editor on “The Giant Is Falling”, about the African National Congress.

In 2014, he photographed his home suburb of Troyeville, rising early Sunday mornings to document well-known places of his youth.

In 2018 Henion Han passed away from cancer. His legacy lives on beyond social documentary, or over identification of race and class, into images of positive human engagement, shot with formal precision.

Before his death Henion bequeathed the rights to his works, to his partner Robyn Aronstam. This selection of images, chapters and texts has been compiled under her guidance.

David Goldblatt’s letter of support towards Henion Han’s application for the Fulbright Scholarship – 1984. 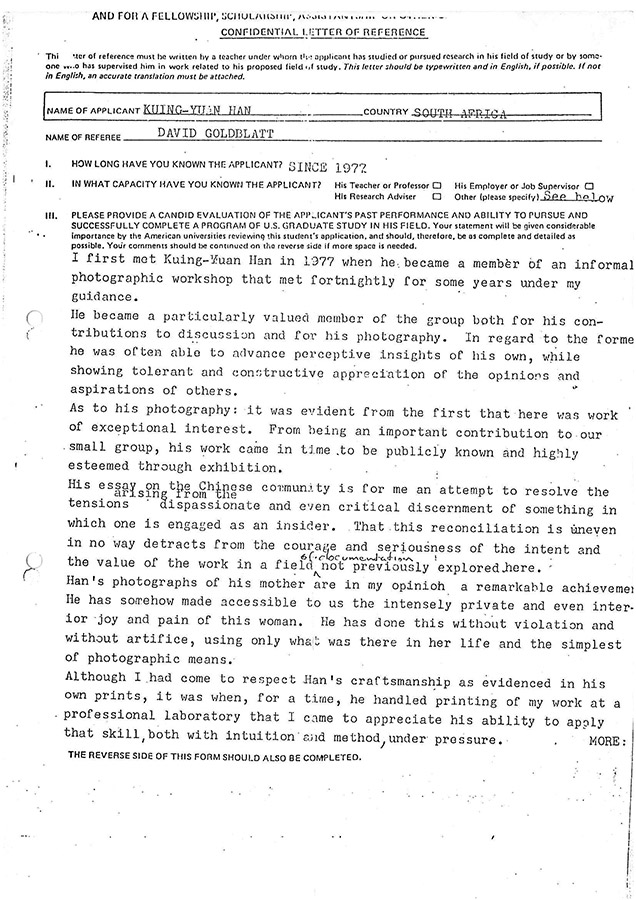 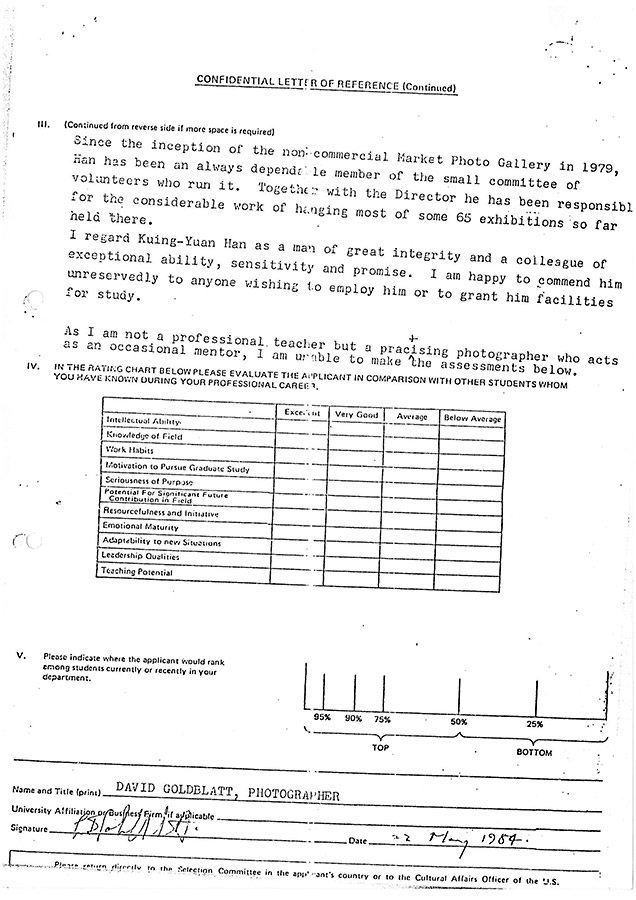 It takes a community to create an archive.